In Late September, 2010 we received our first of several reports of some suspicious Engelhard 100oz silver bars. They were underweight, and it at first appeared that they were real Engelhard bars that were shaved (where someone would cut off a small amount from the sides of the bar).

However, upon receiving a sample, it turned out not to be made of silver, and is most likely lead.

* Width and length of real bar have two separate values, due to the trapezoidal shape.


What is the Fake Bar Made of?

We believe it is a lead alloy, designed to match the density of silver, plated with a negligible amount of real silver.

The ultrasonic thickness gauge shows the sound velocity to be very close to that of lead.


How Does the Logo Look?

The logo isn't quite as good as the videos make it appear. The first giveaway is that the top of the rectangle on the left side is broken with one part slightly higher than the other, which I'm sure Engelhard would never have done. The other problem is that the indented part of the logo isn't as shiny as the surrounding metal.


What is the Shape of the Bar?

A normal extruded Engelhard 100 ounce silver bar is trapezoidal in shape. That means that the top at the bottom are both rectangles, but the bottom is a small rectangle than the top. That results in tapered (slanted) edges.

The fake lead Engelhard bars have straight edges (so the size of the rectangle on the top of the bar is the same as the one on the bottom of the bar).


How is the Finish of the Bar?

Genuine 100 ounce Engelhard silver bars usually either have a rough finish (if poured), or a 'matte' finish (smooth, but with very fine lines on it, not very reflective).

The fake lead Engelhard bars, however, have a proof-like finish, almost as if the bars were polished. And they are very reflective (like a mirror).


What About the Serial Number?


The serial numbers of the fake lead Engelhard 100 ounce silver bar use a different font than real Engelhard silver bars.

In these images, you can easily see the difference in the numeral '8'. In the real bar, it looks like two circles on top of each other, whereas with the fake bar it looks like the number was drawn as a single line (not meeting where it started).

The other numbers also appear different than those on genuine Engelhard bars.


What About Marks on the Bar?


As you can see here, the scratches, dings, and other marks on a genuine Engelhard 100 ounce silver bar differ in color from those on the fake, lead bar.

The key here is that the fake bar is likely silver plated, so any marks will get through to the lead, showing a different color than the metal around it.


What Should I Look Out For?

When you put the fake bar in a plastic bag (so you are only holding the bag, not touching the bar) and tap it with a hammer, you hear a 'clunk' sound. With a real silver bar, you hear a ringing sound that lasts longer.


How Did You Test with an Ultrasonic Thickness Gauge?

You can see on YouTube. You can also see a detailed description on our site.

Since the thickness of the real bar matched that of the thickness displayed on the UTG, we knew that the real bar was made of real silver. With the fake bar, the real measurement and that shown by the UTG were very different, so we knew it was not real silver. We could then calculate by the real and displayed thicknesses, and the real velocity of sound in silver, what the actual velocity of sound in this material was (2,247 M/s).


What else is out there? 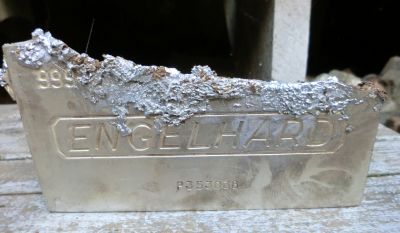 Unfortunately, we have no other information about this bar other than what you see.

For those that are curious: PLEASE DO NOT TRY THAT AT HOME! Lead is poisonous, and needs to be handled carefully.